As so many people asked me about my recent trip to Iraq, here’s a short travel report. Don’t be harsh on me, it’s my first one… Let me know your thoughts or if you got any further questions. Enjoy reading, Cheers Alex

When I was first asked if I’d be willing to shoot and direct a commercial for a product launch in Iraq, I had no idea whether this was a good idea or not. My first reaction was like ‘Omg , Iraq! Why on earth would I wanna go there?’… It turned out to be in Sulaimaniyah, a huge city with around 1.6 million people in the south of Iraqi Kurdistan. After talking to the Austrian ambassador in Amman (we have no embassy in Iraq) and a chat with my client about the trip and organizational stuff, I decided to go for it. That was the start to my short 3 day journey to a new part in my travel life. My flight was scheduled for Jan 7 from Doha to Sulaimaniyah, which is a short flight of around 2hours. We had some delay in Doha but after 2 hours we finally hit the runway towards Iraqi Kurdistan. Lucky me, with my Passport I don’t need any VISA for Kurdistan. Officially I would need one for whole Iraq but the local authorities allow a 15day stay if you fly in directly via Erbil or Sulaimaniyah.

So here we go, Alex goes Iraq. Sounded a bit scary first, but I was sure it’ll all be fine.

The airplane approached the region and we were still extremely high until the plane started to screw itself down and it felt like we literally flew 5-6min in curves… No idea whether this is because of the landscape of the region, Sulaimaniyah is surrounded by many high mountains, or this has any other reason… (as in to fly as high as possible as Baghdad is only 300km away? – no idea!)

Touchdown. We finally landed and first thing that happened was that my mobile phone fell down and broke badly. It was not working any more… Damn, why is this happening to me, now I can’t even call anyone or check via Google Maps where my driver will bring me…

The first great experience I had was at the immigration desk. It went fast and when it was my turn the officer started talking in German to me after seeing my Austrian Passport.. That never ever happened to me before in the Middle East. Hats off! After a quick photo and fingerprint scan I got through. My driver was already waiting for me in the arrival hall and asked: ‘Are you Alex’?

He was a very nice guy working for my client and we got into his car driving towards the City. He also picked up a spanish guy from Barcelona, and told me that we drop him first as he is staying in another hotel. We arrived there and security stopped us. Like in the movies they looked with this mirror thing under the car, exciting when you see this the first time. And they didn’t look into our trunk, just to mention it… Anyway, dropped the spanish guy and drove towards my hotel. It was already night-time, so I couldn’t really see the area around me, but what got my attention were the Police & Military checkpoints. I guess we passed around two or three of them to get out of the airport area. They all just let us pass, no delay.

Next thing to mention and a funny fact: There are no traffic lights in Sulaimaniyah! No kidding, 3-4 lanes in one direction and NO TRAFFIC LIGHTS AT ALL! Proud I finally captured one during the whole ride, think it was the only one in the whole city!

After around 20min we arrived at my hotel. I was staying in the Copthorne hotel and had to pass through security to enter the hotel. It’s like at the airport going through the gate check. Or same as we have in Doha when there is a big event or conference in one of the 5star hotels. And what was even more familiar: The friendly Indian and Pakistani hotel staff that welcomed me with a fruit juice. They even told me that they have been working in Doha before and are missing it a lot. So same same but different.

I went to sleep shortly after I arrived to be ready for the next day. The hotel room was amazing, more like a suite. Very generous and with an office space and a chill area (not in the photo). Really all you’d expect from a 5 star hotel. Complimentary water as well.

I met my crew the next morning and we were brought to the clients headquarters. First time I could see the City by daylight, impressions attached. Heavy traffic and people crossing the street wherever they need to. Most of the streets, even the huge ones got bumpers every now and then to slow down the traffic. The inner city and market were very crowded, many people, men, woman and children are out on the streets every day. From my impression the Kurdish people looked a bit Turkish. Most of the woman hardly wearing a headscarf, some style and color their hair and dress very modern.

We talked to some local guys and they all kind of made fun of us. Like, you cannot film here, they will kidnap you, they will arrest you, etc… Not funny at all, but they were really just kidding. Sulaimaniyah can be considered as a safe place. The local guys accompanied us the whole time and made sure everything is ok. Even when I was standing on the street to take some photos the Policeman next to me ignored me and took care of the traffic so I’d be safe.

What was new to me is that you can buy Alcohol almost everywhere, they serve it in restaurants and sell it in the small grocery stores.

We had no issues at all to go out and work through our storyboard, which included several landscape shots, street and market scenes all over the city. All other shots were within the clients premises indoor. Was finally a great and not scary experience at all. The Kurdish people are very friendly, open and helpful. Might consider going back again.

Some impressions of the City 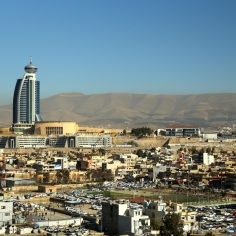 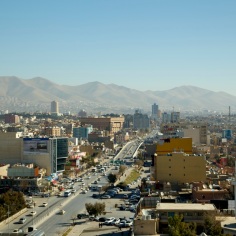 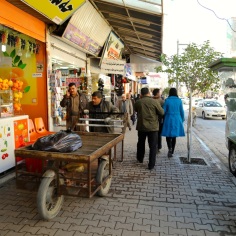 3 thoughts on “Trip to Iraq”